Not sure how the community will feel about this question but its one that I’ve been wondering more and more about every time I see yet another movie do this. It has to do with design trends so let’s see how this goes.

I’m talking about the bar at the top, usually black, with the name of the film in it throughout the entire length of the commercial. More and more movie trailers are doing this. Where did this design trend come from and why? Is there a media I’m unaware of that allows you to click on the movie name or something?

I’m going to attack this from a research perspective, but also include information to make this relevant to graphic design.

I did some research and couldn’t find any article that referenced this technique specifically. Nothing. Anywhere. I did, however, find some good information about movie trailers out in the process. I also emailed the website Trailer Addict{1} to see if they had any information about this trend and they had a great moderator willing to enlighten me with some solid information:

Yes, this is a growing trend and it sort of annoys us. The idea is more for actual television than internet. Usually the release date is not mentioned until the end of the spot, but with this it’s a constant reminder to the viewer of when the film is being released, especially if they decide to step away before spot ends.

The addition of the hashtag for twitter is pretty much there to enjoy the open black space and extra marketing. A lot of times we’ll just cut this area out to bring the video back to proper dimensions.

I think this logic makes sense from an intuitive perspective even if it doesn’t appeal to my designer sense. It adds another area of focus and therefore I would argue makes the viewer less engaged. It is interesting to note though, that this technique is only used on TV Spots. I couldn’t find any movie trailer that extended outside of a minute that used this technique– I challenge anyone to prove this assumption wrong. This reflects a different mentality between the two types. In the land of TV if a trailer has your attention, it is only briefly. Whereas in extended movie trailers, you are engaged enough that the text above the movie isn’t necessary. 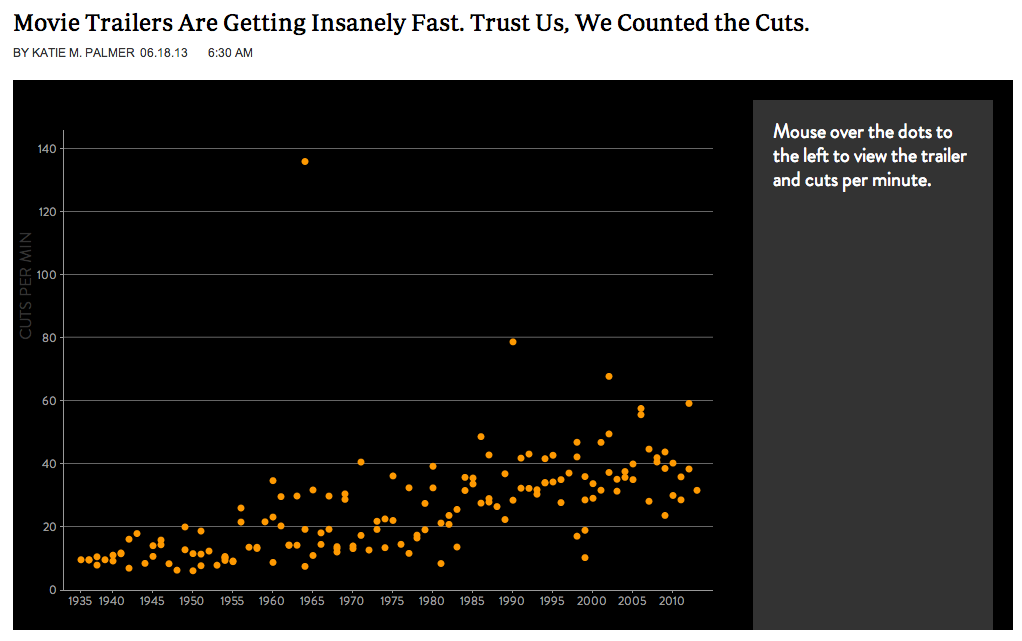 I believe this data trend supports the idea that those who create movie trailers are finding it increasingly difficult to capture the attention of viewers. Viewed through this lens, I can understand the reasoning behind utilizing the letterboxing space in TV spots. It is most likely thought of as way to get the information to a generation that has the focus of my first digital camera or my dog.

Getting the Necessary Social Buzz

Another observation is that this technique is primarily used with hashtags and doesn’t predate the creation of Twitter. This is important to note because this technique’s use seems to increase with the use of social media.

If you recognized that your target demographic was heavily engaged in social media, it would make sense to utilize those streams. According to Deming Hill{3}, the use of social media in trailers reflects the competitive landscape. To ‘BLOW OUT’ the premiere, it requires a Herculean effort and coordination to create the chance of going ‘viral’. I would say that this technique is a way to create legs for opening night and is becoming successful in doing so.

Film Annex explains in an article the importance of hashtags. It builds micro communities around events and allows potential viewers to feel engaged in the process.

Why do hashtags matter? Because in today’s fast-paced, information-filled world, hashtags are brief enough to draw attention to specific topics

In conclusion, this ‘Letterboxing’ information technique’s use can be explained by its efficacy and the changing dynamics of the movie trailer. Although its logically appealing, I’m not sure if it is justified from a design perspective. It could make sense as a larger strategy to include this technique right before the premiere of an event to time a critical peak of buzz. In fact, I would think to a certain extent, this probably happens.

{1} : Thanks to Trailer Addict for taking time out to answer this question. They live and breathe TV trailers over there. (http://www.traileraddict.com)