I have a navigation menu with some buttons, that looks a bit like this (NOTE: Each button has a distinctive icon that differentiate it from the rest, I didn’t add them to the mockup but they are similar to Wins8 icons):

Some users have reported accidentally clicking Sign instead of Send, something that is just inadmissible. I’m now considering ways to differentiate the buttons more. One option is to move Sign to the right. The other, (probably adding to moving it) to change its color: 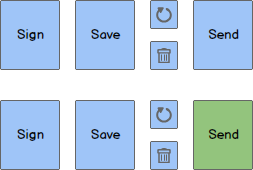 Is position good enough differentiation? Or should I consider using color as well? Adding a new color to this navigation has some impact in the overall palette and look, so it has a price I’d have to pay.

It also doesn’t help that you’re working with three four-letter words that all start with the letter ‘S’. 🙂

Color is an immediate indicator that something is different. In your first example you really have no idea what any of those buttons do unless you really take the time to pay attention and read them, at a glance, they are far to similar to differentiate. A paradigm we use where I work is that we make our primary action a separate color from any less important or less permanent/finalizing actions.

But color isn’t necessarily the make it or break it point either. Another valid strategy would be to associate an icon with every button (not just with the last two). That way you’re creating another easily distinguishable difference in the elements.

As for your actual question, if the position is enough differentiation, I think that it certainly helps because the pattern of buttons is broken by the two smaller ones which forces you to really look at the differences in the buttons rather than ignore them. The added color only helps to accentuate this further, and personally, if possible I would add the color in as well, as that helps future proof it in case more options are added in later and the button may be missed more often again. Though, providing that changing the color is difficult to do, I would find the new positioning to be sufficient.

However what I think is probably much less relevant than what your users think or do, and if you have the resources to, I would try some various designs and test it with users to see which they prefer and for what reasons.