Working on a project, I need 2 icons for Vegan and Vegetarian to display at a glance nutritional information. The problem that I’m running into is that there doesn’t seem to be a good way to have each icon stand alone and the user knowing exactly what it stands for, example below.

Vt is fairly easy to understand as vegetarian. But Vg runs the problem of not knowing that its Vegan without seeing the other icon. Is there a standard way for conveying vegan and vegetarian?

Additional Specs:
The icons will be used in a variety of sizes from 150x150px to 24x24px. Here’s an example of the current icon set: http://imgur.com/2NkXIcN

The standard for vegetarian is generally just a “V”, usually in a green circle or something similar, and that’ll be pretty much universally understood.

The Vegan Society has “the Vegan Trademark” which has been around a long time and since it explicitly says “Vegan” there’s no ambiguity as there is with “Vg” vs “Vt”. I have seen “Vg” and “Vt” used in the past, and even as someone who was vegan for ~12 years it wasn’t clear to me what they meant; so stay away from using those.

Something that’s worth pointing out though… If something is vegan it is by definition also vegetarian so there’s generally no need for both icons; if someone sees “Vegan” they already know it’s vegetarian. 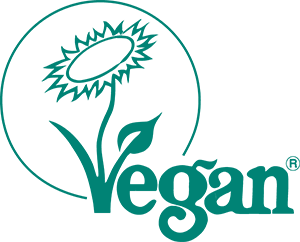