I have a PSD comp for a website and the titles are in ITC Avant Garde Std. What’s a good replacement font? It should be available for the web, either free or on TypeKit. 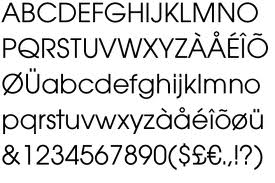 Century Gothic is pretty well-saturated on the Web and has letterforms that are in the same ballpark as Avant Garde. If a Mac doesn’t have it on their system, you can put Futura lower down the font stack.

Not sure how scientific these surveys are, but the numbers are in line with what I’ve read before: Century Gothic is on probably about 87% of PCs (63% of Macs too!) and Futura is on about 96% of Macs.