Closed. This question needs to be more focused. It is not currently accepting answers.

Want to improve this question? Update the question so it focuses on one problem only by editing this post.

Recently Malika Fabre post on Twitter a clear and blatant (and coarse) plagiarism of one of her magnificent posters for the British Bafta Awards (Twitter link): 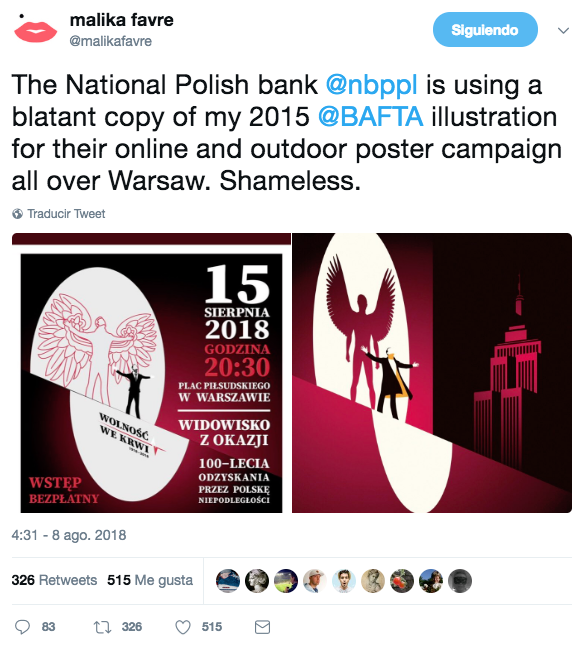 In a Design course, as a final work, the students had to make an infography of their professional life: a Life Map. Among so many students it was clear that some similar idea would appear. One of the most recurrent was the design around the personal fingerprint.

Knowing that everyone did the job at the same time and delivered the same day, the general question was: if it’s a professional job, is that considered plagiarism?

The answer for the course was that personally, rather than plagiarism I would consider it a lack of conceptual or design search. Stay with the first idea that comes to mind without deepening, neither conceptually or morphologically. What is not wrong, but in a professional is expected a higher level of self-exigence.

This is the 2018 summer campaign of CocaCola drink Aquarius in Spain and one of the great works by Steve Bronstein for Absolut, Absolut L.A. Special attention to the location of the springboard and the pool ladders: 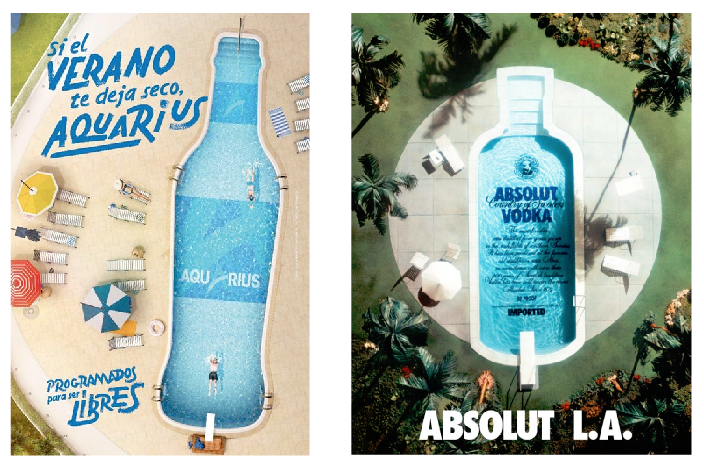 What’s the limit: the idea, the design, everything. Can Absolut say the idea of ​​the pool-bottle belongs to them or making an advertising campaign with a pool with a bottle shape is free to everybody?

Note: I don’t know if Absolut belongs to Coca Cola.

Edit after the comments

It is obvious that talking about multinationals, the responsible for the advertising campaign is another multinational. These companies usually have countless of well-informed professionals and it’s clear that more than one of them knows about the existence of the oldest campaign with the bottle shape pool since, in addition to being highly promoted at the time, it appears in a significant number of sites.

For this I suppose that there is no plagiarism, copy or inspiration, more than the permissiveness of, even knowing of the existence of that design, to accept it as an alternative for the new campaign.

Maybe the designers we are visually over-informed, in my case, when I saw the advertising immediately I said Absolut L.A.! Actually to put the image in the question I had to go back to the place where the new advertising is and read the name of the drink.

Therefore, what is the limit within that permissiveness, if it exists? Or is it all OK?

Complex issue. This will probably not be an answer, but an insight.

We have an additional problem… several in fact.

Some years ago we could say that one work was inspired, or a tribute to…

People are ramping the world with cellphones taking the same pictures because they are standing in the same spots.

“Good artists borrow, great artists steal” by Picasso. Does this still apply? Is this always the norm? Did this apply when Greeks took Phoenicians alphabets or the Romans took Arabic-Hindu numerals?

I am not sure if there are really a board spectrum of tools designers have at their disposal. We can think there are millions of colors in the world… but humans can only name a few dozens of named colors… and can not agree on the names.

Was Andy Warhol a great artist? is Hyperrealism valid? Is photography stealing?

There is also true the proclivity of some people to “sue anyone” and to even”register” natural events!

I just hope for the sake of humanity the line is not very stiff.

And some laws will probably find posting a link a law infringement to “protect” the rights of the authors… Yeap we live in a crazy world.