As you can realize, in most fonts the hyphen-minus does not have the optimal width, thickness or position to represent a minus sign and therefore practicaltypography.com suggests to

use an en dash, which makes an acceptable minus sign in spread­sheets or mathematical expressions.

But in my opinion this is a little bit misleading, because an en dash is also used to indicate spans or differentiation:

On the other hand there exists a “correct” minus sign (Unicode character U+2212 and HTML symbol &minus;) for “everyday speech” but which is rarely used for some reason:

I wonder now if a hyphen(-minus) sign, en dash or a minus sign should be used to represent a minus in typographic context.

As @PieBie and @Zach Saucier pointed out there are many use cases out there. But does the type of publication make any difference?

I mean why should we not use the same minus character when writing a mathematical equation or indicate a negative vote for a post for instance on this site: 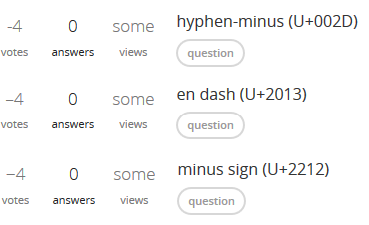 As a side note: I also dont know why no minus sign (U+2212) but rather a hyphen(-minus) gets displayed when we press the minus key - on our numpad. Why are there two same keys for different characters?

Note: The sans-serif typeface Arial was used in the examples.

That’s what it’s for, after all.

That being said—unless you are writing for a mathematical publication or in a similar context it probably won’t go noticed if you do use a hyphen or dash. I know I have used a hyphen-minus or en-dash countless times in the past.

As you mentioned in your question, there is no key for a minus sign on a keyboard, only a hyphen. For that reason alone, average Joe doesn’t use a minus sign, he uses a hyphen (or hyphen-minus).

A few things to note.

A few examples of dashes and mathematical symbols in different fonts, to illustrate the difference in alignment: 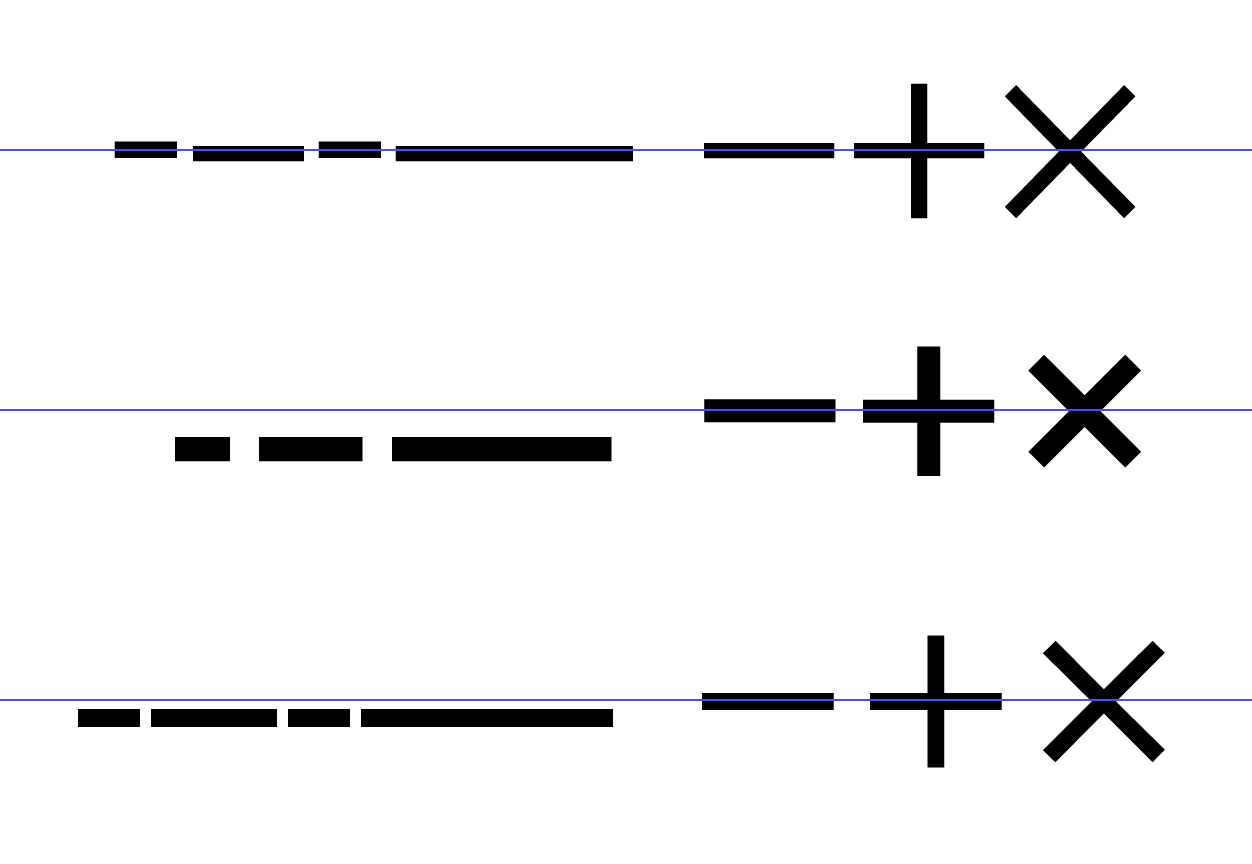 If no minus sign is available, the en-dash should be closest in design and should be used instead.

The hyphen key on your keyboard is actually called hyphen-minus because it is intended to be used as the minus sign and for hyphens/dashes. This character is still present in Unicode for compatibility reasons (its character code is U+002D), but Unicode also encodes the hyphen (‐, U+2010) and minus sign (−, U+2212) separately.

I assume no minus sign, or any specific dashes are included in keyboard layouts for a number of reasons. Firstly historical—it saved space on typewriter and early computer keyboard keys. Secondly, it wouldn’t really make sense—how would you differentiate the various dashes, hyphen and minus sign? The length would be hardly noticeable in isolation and adding en, em etc would probably confuse anyone not versed in typographical terms.

With regards to your note on the numpad, I’m not sure why a minus sign isn’t used. It seems like it should be. It may be for technical reasons. I’m not familiar with the engineering of a keyboard but maybe both hyphen(-minus) keys use (or historically did) the same circuitry. It may also simply be not to cause confusion, with two identical looking keys outputting different characters.

In short—If you are writing mathemtical formulae, use the correct symbol. Otherwise you can probably get away with a hyphen-minus or an en-dash (but if you’re going to the trouble of using an en-dash, just use a minus sign!).