I was looking into designing a font that could include characters with diacritics but outside of knowing any other language besides English I was unsure if there was a reference or method designers use when designing characters that include diacritics.

For those English only members that do not know what a Diacritic is:

a sign, such as an accent or cedilla, which when written above or
below a letter indicates a difference in pronunciation from the same
letter when unmarked or differently marked. 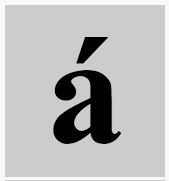 Since the modification of a diacritic can mean another meaning for the character is there a tolerance allowed or does that come down to having to know how to write that language? Are there some languages that do not allow any alteration to the diacritic? Do charts exist for some language characters?

Some background on me, so you can estimate how much or little authority I have: My native language (German) uses diacritics (ÄÖÜäöü) as well as non-diacritical special characters (ß) and is in the process of introducing or rejecting a new special character (ẞ, the capital eszett) right now. I did some research on the diacritical characters myself for the purpose of including them into a blackletter font, which could not easily be done by looking at existing fonts, due to the differences between blackletter and roman type.

Since the modification of a diacritic can mean another meaning for the character is there a tolerance allowed or does that come down to having to know how to write that language? Are there some languages that do not allow any alteration to the diacritic?

Most diacritic letters are used by more than one language and in fact many languages borrowed diacritic letters from other languages when they were in need for one. Given the globalisation of typography, it thus makes sense that a given diacritical character looks the same in every language that uses it.¹

Thus many users of languages with diacritical characters will use realisations of these characters designed by somebody not speaking their language on a daily basis. As a native speaker of such a language, I very rarely encounter badly designed special characters – and if I do, they often occur in generally horrible fonts and common sense should have sufficed to avoid the mistake (e.g., do not place the two dots of ä on the same height as those of Ä). I have encountered wrong ogoneks (as in ȩ) though, despite not speaking any language that employs them – I attributed most of them to utter laziness however, as they just recycled the cedilla (as in ç).

I am not aware of any characters or languages where a small change to the character would change the meaning.² Such a “feature” would probably not survive long, as it does not allow for an easy distinction when reading and it would require an excessive effort to distinguish the characters when writing them by hand.³ Most languages have some restrictions and preferences regarding the appearance of their diacritical marks, however.

That being said, it is generally a good idea to inform oneself about the diacritics of the languages one would like to cover and not wildly start designing them. A few examples:

¹ The only exception I am aware of is the acute accent in Polish, which should have a certain steepness, whereas there is no such requirement in other languages, as claimed by here and here. However, these sources also state that most or at least some fonts have sufficiently steep acute accents anyway.
² There are some examples in the International Phonetic Alphabet, though.
³ There are alphabets, however, who have strong variations between printed and handwritten characters, such as Cyrillic or Polish for some of its diacritical characters.
⁴ With the possible exception of minimalistic pixel fonts and similar.

Do charts exist for some language characters?