I was looking for a rule or study that could help define how one would design text for a vehicle wrap. I’ve noticed that some wrap a vehicle based on the vehicle’s contours but some wraps’ designs are based on a level horizon.

For example this van below, even though the graphic is small, it is wrapped level: 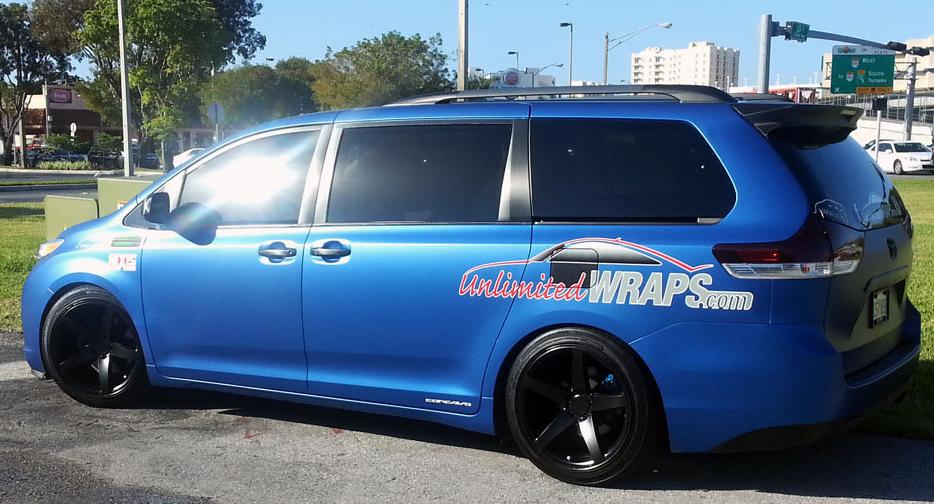 However, when you look at this vehicle wrap the typography follows the vehicle’s contour:

I understand that it may depend on vehicle but what I am after is how the design should be considered. Is there a study that indicates typography on a vehicle in movement has a better chance of being seen when based on the horizon? Is there a justifiable reason that typography on a vehicle should follow the contour other than it is aesthetically pleasing to one’s eye?

I don’t have facts to back up my claims but I think part of it has to do with placing text in an area for legibility reasons. You will usually find text graphics in 2 main locations. The back of the windshield and the front driver & passenger doors. The back windshield being the prime location for any graphic. I believe the the second best location would be the front driver and passenger doors. My theory would be that if you’re driving, you will mostly likely be parallel to the car next to you for most of the drive. Whether you’re driving the same speed or at a light/stop sign.

For the horizon factor, I believe this depends on the model of the car. Now I haven’t seen any studies on the best way to position a graphic but it would seem you would want to make the graphic parallel to a major part of the car with space around the graphic for visibility. You would also want the graphic closest to eye level as possible. This is why the second picture works so well. The text is on a flat part of the car between the curve from the door and the extruding line below the text. It also works better because of the higher contrast.

With the first picture I would argue that it is a little hard to distinguish the text because of the black square behind the text. I think this is harder to read than the second picture.

So to recap my points

Place text on a flat surface that is parallel to the cars structure (I think this has to do with the aesthetic part of the design) that is in a prime viewing area for the best text readability.