I wonder where drop caps should be used. So far, I only see them in column of newspaper. Are there any cases which drop caps shouldn’t be used, like in scientific papers or brochures?

There are many ways to indicate the beginning (or resumption) of a section of text, including paragraph indents, blank lines, changing the weight or style of the opening part of the text, ornamentation like fleurons — and versals, a category that includes drop caps.

Versals, also known as lettrines, originated in the scribal tradition of illuminated manuscripts. The Book of Kells and the Lindisfarne Gospels are overflowing with elegant and sometimes even lavish examples of these.

For example, from the prefatory material to the Gospel of Mark in the Lindisfarne Gospels on page 15, we find this excellent example from around 700 ᴀᴅ: 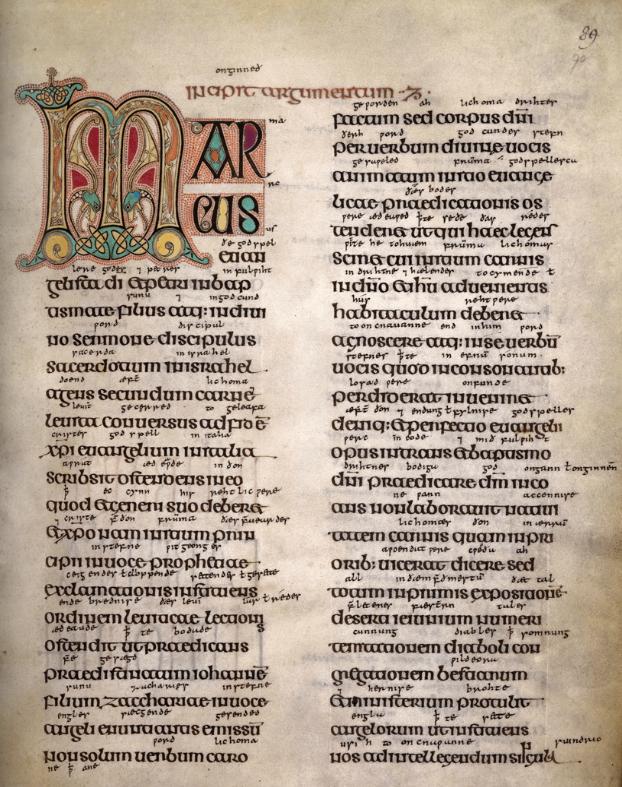 Here the opening letter M for Marcus is a large versal, but the scribe does not just jump right into regular text, but finishes the rest of the word in a style intermediate between the versal proper and the normal text that follows it.

For the most glorious of versals, where no expense was spared, silver or even gold leaf was added (tip for calligraphers: when laying silver leaf, use a blue backing, and when laying gold leaf, a red one), and the versal could expand to fill the entire page.

Perhaps the finest example of this is the Book of Kells’s Chi Rho page, whose chi-rho monogram of the Greek letter chi, Χ, and
the Greek letter rho, ρ, is not only a page-filling versal but a unique work of art: 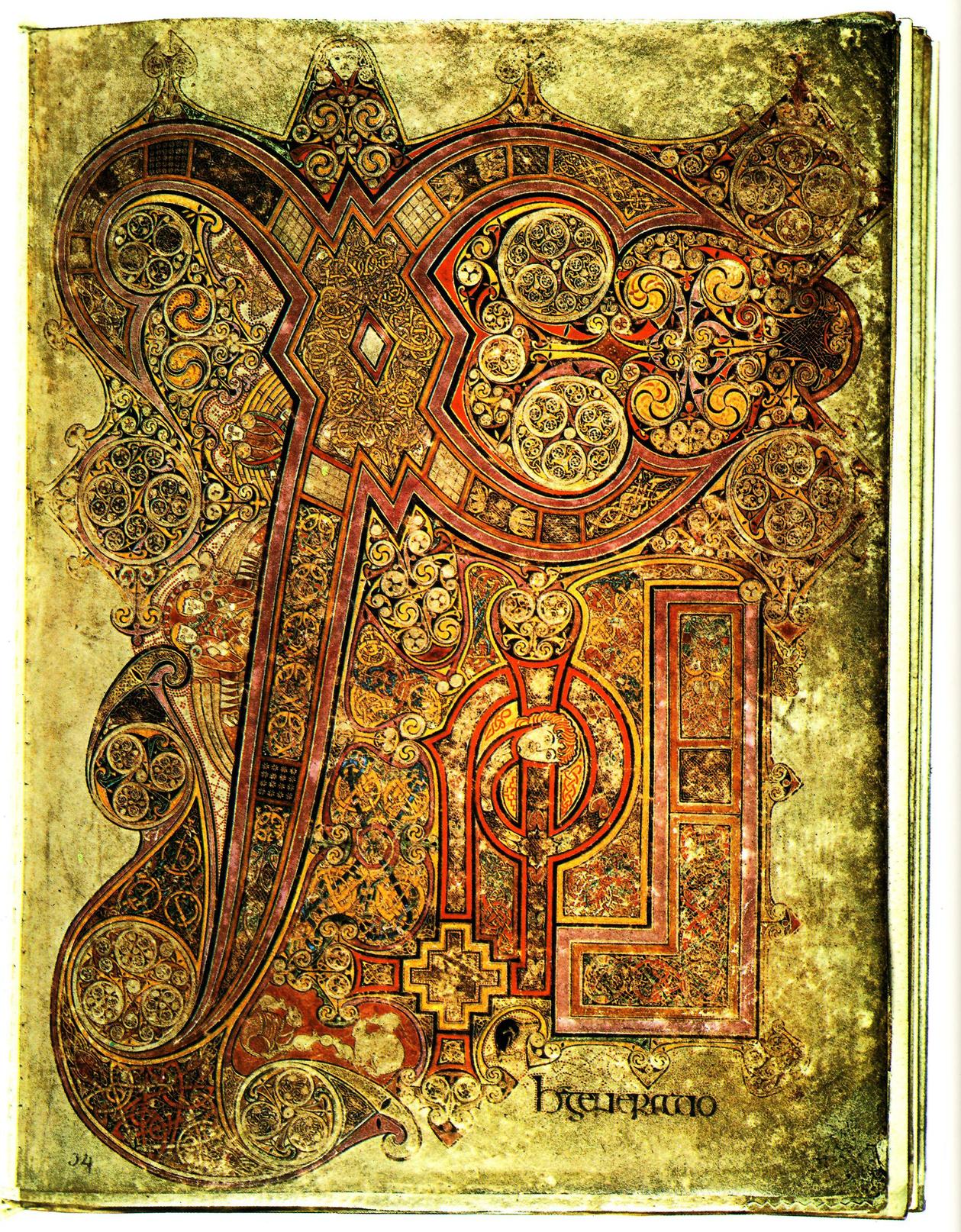 By the way, that monogram is so famous that it has its own code point in Unicode, U+2627. That’s ☧ in the current font, or

Following Gutenberg’s Bible, the second book to be printed using movable type was the Mainz Psalter in 1456. This typeset work artfully combines two-color printing of movable type and woodcut, with the woodcut versals printed in blue and red and the “normal” (read, movable-type) text printed in black and red: 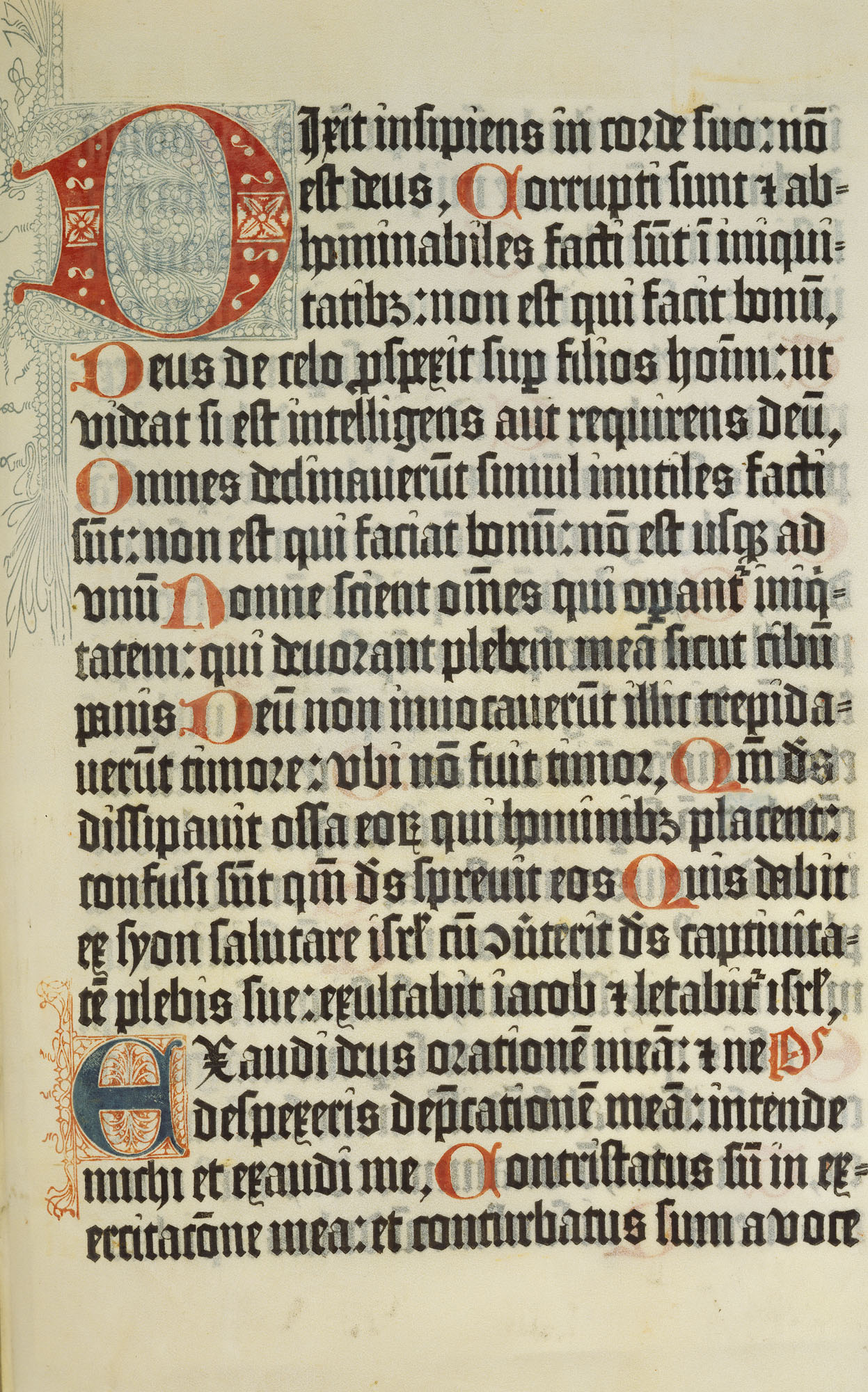 So versals survived the transition from manuscript to set type reasonably intact, although just how much trouble and cost the typographer and printer wants to puts himself through varies. For exceptional printings, a rubicrator was hired to add the finishing touches by hand. The Mainz Psalter was quite expensive to produce even its day, and two-color printing remains something of a rarity today, where it is found only in the fanciest and generally collectable volumes.

Costly though such printing is, combining illustration and type in the page and in two colors no less, it was still immeasurably cheaper in both time and material than the illuminated manuscripts that preceded it: it could be mass-produced.

Versals continue to be used in print today, although more often in fancier texts than a refereed journal article. You see them often enough in magazines, although not always to the same level of quality. A lavish, leather-bound volume printed in two colors may well have them.

But on the web, calling it a challenge is too charitable by half, for the web has for the most part not even reached Gutenberg’s level of sophistication in typography. It can be done, but it is difficult and tricky, and varies depending on what technology you are using.

However, if you are setting a text that shall see actual print, or are using something like InDesign to set that text, then you certainly can use drop caps.

In The Elements of Typographic Style, Bringhurst spends a fair bit of time talking about how to do, and how not to do, versals in typeset text. Here is just a small excerpt of the larger text on the matter, with bold emphasis mine:

[. . .] Another excellent method of marking the start of the text, inherited form ancient scribal practice, is a large initial capital: a versal or lettrine. Versals can be treated in many ways. Indented or centered, they can stick up from the text. Flush left, they can be nested into the text (typographers call these drop caps, as opposed to elevated or stick-up caps). If there is room, they can hang in the left margin. They can be set in the same face as the text or in something outlandishly different. In scribal and typographic tradition alike, where the budget permits, versals too are generally red or another color in preference to black.

Elevated caps are easier to set well from a keyboard, but drop caps have closer links with the scribal and letterpress tradition. And the tooling and fitting of drop caps is something typographers do for fun, to test their skill and visual intuition. It is common practice to set the first word or phrase after the versal in caps, small caps, or boldface, as a bridge between versal and normal text.

On the following page, Bringhurst then illustrates seven examples of how a versal can be set, with subtle differences between them. 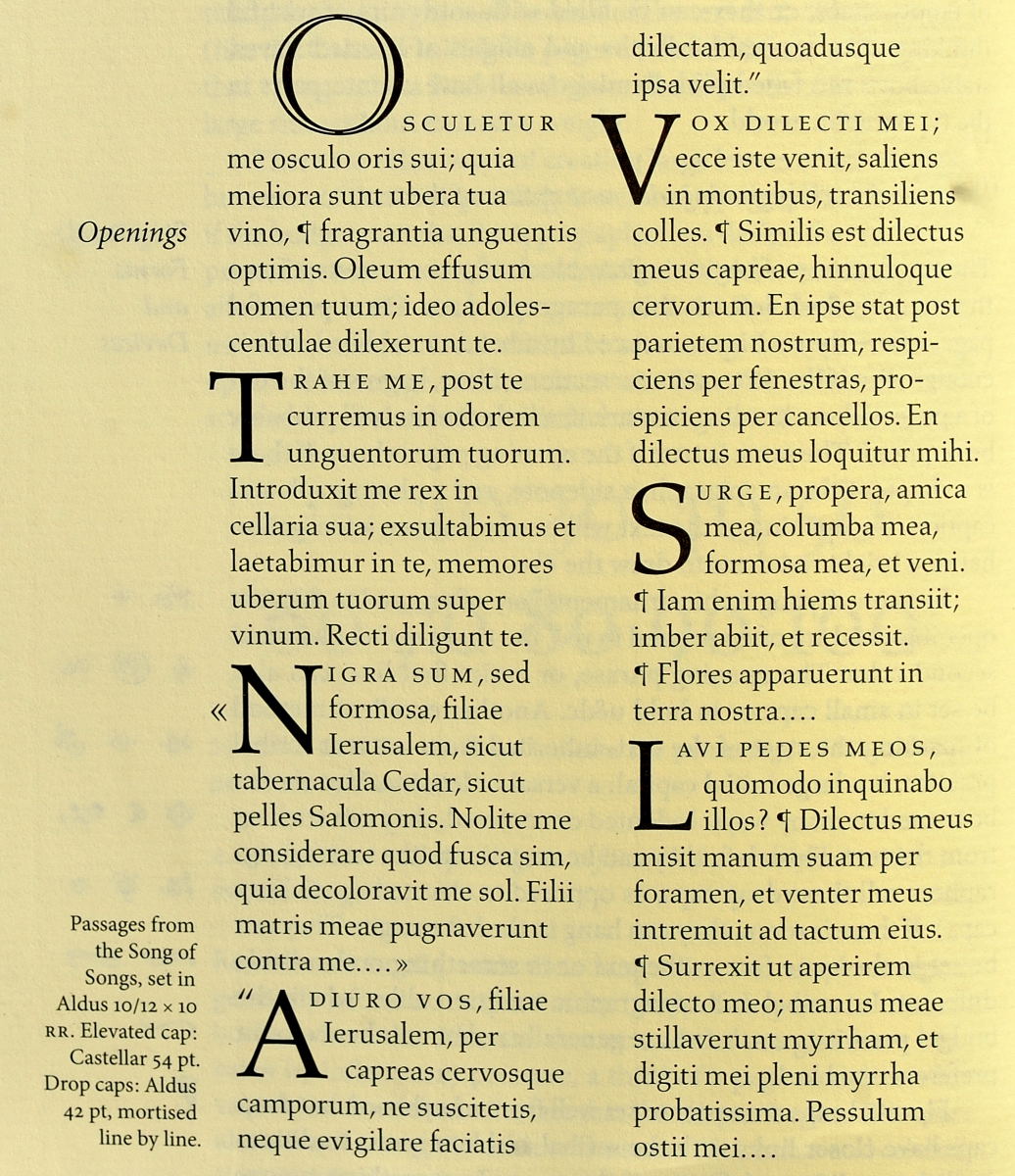 In each example, Bringhurst uses small caps for the phrase that the versal began, which serves as a stepping stone to the normal text. Every one of his seven versal examples does something slightly different from the others:

As you see, there’s a lot more subtlety to doing a good job with drop caps than might be immediately obvious. That’s why it is “something typographers do for fun,” as Bringhurst puts it.

How Not to Do Drop Caps

So where should you use these? They work best at the beginning of a chapter. They would not be used in text submitted to a refereed journal because that journal will always have its own style into which your submission must be fit.

But setting them well requires skill, and it is better not to use them at all than to set them poorly. In my opinion — and with all due respect, the example given in another answer here is an example of how not to set a versal: 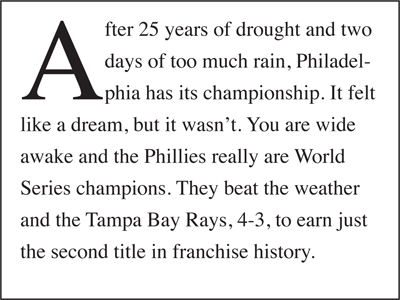 What’s wrong with that, you ask?

For one thing, it is using a drop cap for After but not fitting the text to the right to the versal’s shape. It does not look good to have all that space, and the reader might momentarily wonder what “a  fter” might be.

For another, that text block ends up crowding the versal too much, even though it started out by not crowding it enough. The phia at the start of the last indented line is nearly on top of the bottom right foot of the A. You have to let your drop caps breathe; notice how differently Bringhurst’s A is set compared to the one in the later example.

Finally, there is no transitioning from the drop cap to the normal text. It just abruptly switches to the full body text with no intermediary form or forms. That’s not very attractive — or sensible.

The example added to the original question has many of the same problems, and then some:

Problems in that example include a misaligned baseline for the versal, no fitting of the text to the letter, lack of transitioning from versal to normal text, and not enough breathing room for the versal. See the Bringhurst L for a better way to do all that.

The example also uses the nonsense Lorem ipsum text — which, being not Latin but fake-Latin “garblese”, can seriously annoy scholars, since it has “words altered, added, and removed such that it is nonsensical, improper Latin.”

Lastly, something has gone very wrong with the kerning for that font; look, for example, at the letterfit around the various instances of the letter c. It’s as though there were a thin space inserted after every c.

So drop caps can be done just fabulously when properly setting text, even if the brutish typography available on the web can make this seem next to impossible to do well.

But if you’re creating PDF not HTML, go for it, because drop caps certainly can be done wonderfully — and should be, or not done at all.