Like many classic fonts, there are several different cuts of Gill Sans by various publishers. Monotype distribute it as ‘Gill Sans MT’, and Adobe and ITC have their own versions.

Which version is the version that is distributed on a Mac? I can’t find any authoritative answer or clues in the font files themselves. All I’m able to discern for certain is that Gill Sans (Mac) and Gill Sans MT aren’t identical – at regular weight, they’re almost identical (tiny, tiny differences in aliasing but no significant differences), but Gill Sans Bold as bundled with a Mac and in MT version are simply very different weights. (I currently don’t have access to Gill Sans Light to test). 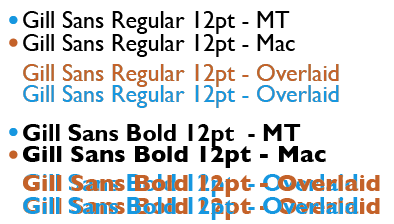 So, which cut of Gill Sans is it that comes with Mac OSX?

For bonus points, if it’s the Monotype cut:

I believe the Apple-bundled version is an earlier digital release by Monotype.

From OS X 10.6 Lion font list, note it’s listed as GillSans [sic], rather than Gill Sans. This name difference might seem to be trivial, but read the Typotheque article Eric Gill got it wrong; a re-evaluation of Gill Sans:

Ever since Gill Sans was incorporated into the Adobe/Linotype library
in the early 1990s what used to be Monotype Gill Sans became GillSans.
The new compound name and the missing foundry attribution serves to
distance today’s users of this type from any awareness that Monotype
used to issue Gill Sans in a range of different series with alternate
cuts. Readers with experience of metal and phototypesetting may recall
this system, but for now, the majority of us only have this ‘bundled’
[with OS X] version of GillSans to go by.

Even if the “GillSans” now appears as “Gill Sans” in OS X 10.7, it seems very likely it’s the same thing.

To cover your point about weight, for some reason the Bold looks to be equivalent to what Monotype or Adobe now sell as Extra Bold.

It would seem that the underlying design is common to all foundries’ versions. But as yu have found, there might be small differences in hinting, or the included glyph set.

I can’t answer your last point, but suspect the answer is “more trouble than it is worth”!