I’m new in graphic design and am learning type design now. I’m learning about kerning now and it all makes sense except I’m wondering why the kerning wouldn’t be built into the font style already. I’ve read that the foundry can spend months or even years on a font design.

Thanks for help in advance.

There are several reasons why you might end up kerning type.

Well-made and carefully designed typefaces include a kerning table that provides applications with instructions on how to adjust space between letters when they are displayed in text.

Unfortunately, there is no way to account for every single letter relationship at every single possible size. There is no way for the type designer to know in advance just how large or small you might make some type in your design.

In electronic fonts each letter occupies a rectangular box. There is usually some whitespace around the character on either side. The distance from the furthest point that describes the glyph to the edge of this box is called “sidebearing”. The goal of kerning the typeface is to make this spacing appear consistent.

When a type designer kerns their type, they are trying to make the apparent space consistent and balance certain factors:

The kerning of all the characters can take some time.

Assuming the designer has done their job well, when text is set using it, it will be comfortable to look at and generally look all right when used in a way that’s close to its intended purpose.

At this point, several other factors come into play.

Software you are using may not recognize and use the built-in kerning information in the font. Microsoft Office Word for example has kerning OFF by default. If the software you’re using ignores kerning info, you will have to kern, no matter how meticulous the typeface’s designer was about kerning.

Some applications may recognize and use the kerning, and may optionally override it. Adobe apps such as InDesign do this. Fill a text block with some placeholder text (and if you haven’t changed defaults and are not applying your own styles) it will default to a kerning Value of ‘Metrics’. You can override this, by choosing ‘Optical’ and InDesign will apply its own kerning to the typeface, overriding the built-in kerning. You can of course override this too by inserting your cursor between two letters and adjusting the kerning value as it suits you.

The reason you are granted this control is to enable you to solve problems as you encounter them.

One of the common things you will have to deal with is the fact that as you increase the size of type, the space between the letters gets larger as well. The typeface’s kerning instructions might say, “Make the lower-case ‘o’ move left closer to the capital ‘T’ that precedes it, and do it by -20 units”, those units that it’s using are themselves getting larger. At this point you will need to kern. Even if the typeface was made by consummate professionals who care.

The following illustration shows this effect:

Here is the effect of different kerning settings in Adobe Illustrator: 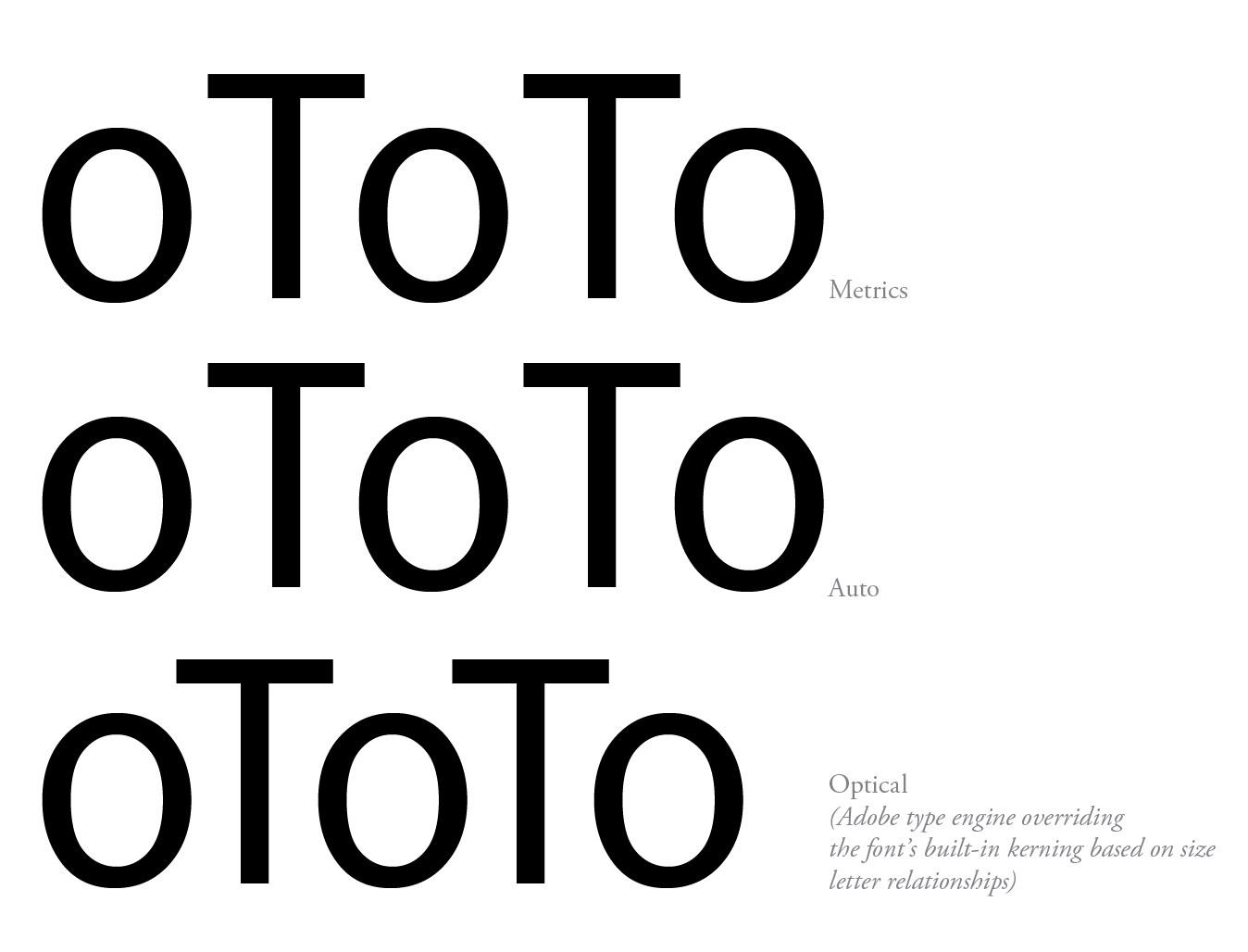 Here are two blocks of text. The first isn’t bad using the built-in kerning. The second using Optical kerning may look a little cramped depending on your taste:

Thomas Phinney has a great article on kerning while designing a typeface and how it works: http://www.thomasphinney.com/2014/01/kerning-and-spacing-fonts/