I’m a developer, I’m not a graphic designer. But there’s one question that bugs me every since I’ve noticed it some years ago.

Anti-aliasing is a method for removing the sharpiness from high contrast divisions, such as character edges and geometric forms, if there’s someone who doesn’t know.

When you get an anti-aliased character written in black on a white background, and you zoom in to see the pixels, there are colors different from the ones found in gray-scale, which for me seems ilogical, since we only need to make a smooth transiction from black to white.

Question: Why are colors different from the ones found in gray-scale used for anti-aliasing a black character in a white background ?

PS.: I’d create the “anti-aliasing” tag if I had enough reputation.

Update: I’ve thought of a theory now.
If the letters are intended to be displayed in a computer monitor, and the smallest portion of a screen that can be black is an entire pixel composed of three little lights, that would cause the smallest dot in any letter to be fairly large, but if the anti-aliasing composed by surrounding or inner dots can be represented for only 1/3 of a pixel with some assistance from the color to the side that would mean that letters could be way smaller.

This is called clearType in windows (or sub-pixel rendering like Marcelo said)
The idea is that instead of using 1 value for 1 pixel:
(127,127,127) < Gray

and then the same for the right sided pixels 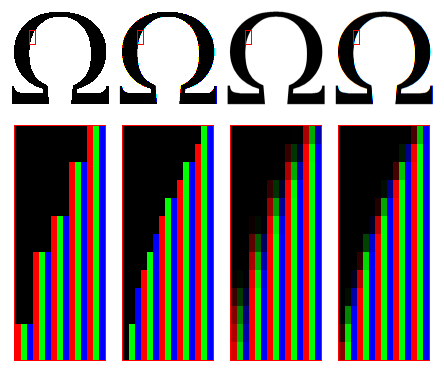