All fonts I have ever heard of are two dimensional: each glyph is basically a two dimensional region (a closed contour or some closed contours), which the software or printer somehow strokes or fills depending on the instructions given by the user. I would like to know whether there are one dimensional fonts, where the glyphs are described just as collections of segments (which the software can stroke but not necessarily fill), not of regions.

In other word (or better, in images), what I would like to have is the left thing instead of the right one in the picture below. Does this exist? 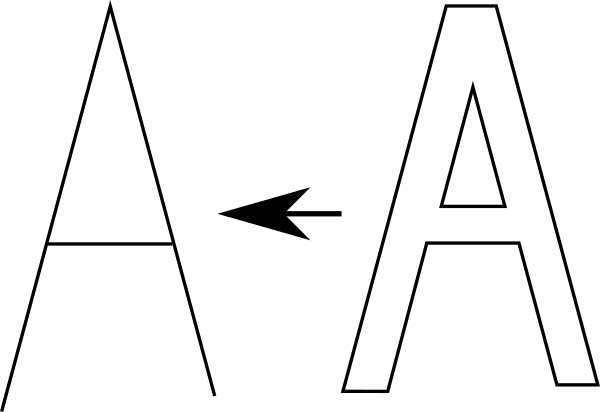 (sorry for the picture, I know it is really bad; I just did that quickly)

A plotter strokes images onto paper using a pen. It cannot fill images except by repeatedly stroking them less than a pen-width apart. So fonts designed for use with plotters will contain glyphs with one stroke (“simplex”), two more or less parallel strokes (“duplex”), or three strokes (“triplex”). Fonts with more strokes take longer to draw but allow more variation in stroke width within a glyph. Using a pen too narrow for a glyph at a given size will cause visible gaps between the strokes.

One example of a mostly simplex font is Hershey Vector Font. Its at sign @, brackets [], braces {}, and tilde ~ are duplex.

If you’ve seen “blackboard bold“, that’s a 𝕕𝕦𝕡𝕝𝕖𝕩 font with the pen width less than the distance between strokes.

Old-school imaging libraries supported stroke fonts in much the same way as a plotter does. When rendering text, an application would set the stroke width and color before drawing text, just as it does before drawing a line. This is analogous to selecting a pen on a plotter.

But modern raster imaging libraries use OpenType fonts, which contain TrueType or CFF (PostScript Type 2) outlines. OpenType fonts simulating stroke fonts instead contain the outline of a stroke at some line width. This stroking operation can be reversed by insetting the glyph’s outline by a distance of half a stroke width, sort of the inverse of algorithmic bold.