I have a window with the following appearance: 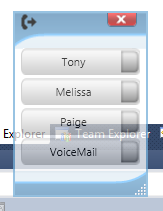 What I would like, however, is if the Button controls (the gray ones with text in the middle) in the Window‘s main Grid had an opacity of 1, totally opaque. As I inherited this project the opacity was set to 0.75 at the top level, inside the opening Window tag. Now as I understand this will automatically enforce that on all children and that said children cannot override.

I can supply code if requested, but it is really as simple as a Window with windowstyle=none and opacity .75 containing a Grid, which contains some very basic Button etc controls.

Has anyone built such a Window before or otherwise have insight into generating one? Thanks.

Instead of setting the opacity of the window, set its background’s opacity: