Yahoo is currently changing its logo’s font every day and I particularly liked this font: 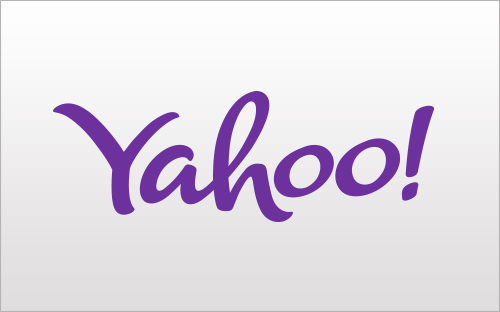 Would anyone know if this font is a custom development of Yahoo or if it is some (possibly paid) public font?
I tried myfonts.com but it couldnt identify it.

Someone is welcome to prove me wrong as this is not authoritative, but I believe that it’s a custom job. Here’s why:

The ‘o’ glyphs are different. That rules out most basic free fonts and indicates either custom or a more recent OpenType font.

The second ‘o’ glyph is slightly larger than the first and moves upward just a bit. This fits with the current Yahoo! logo as well as the other logos released so far:

If this observation is correct and not just incidental, it means that, at the very least, a commercial font was customized.

Finally, most fonts that would have an ‘ah’ ligature like that wouldn’t do a ‘y’ or an ‘o’ like that. Take a look through MyFonts’ list of script fonts – you’ll see that if the ascender of an ‘h’ is looped, the ‘o’ will typically be looped as well, or it’ll show some kind of indication of where the pen was placed on the paper and where it was removed. Same deal with the ‘Y’.

If you’re looking for some great script fonts, browse MyFonts or just check out Sudtipos – they do really great work.

It’s possible that they just got lucky and found something that fit their general logo scheme (big Y, small A, big H, small O, larger and more elevated O) really well, but the more likely explanation is customized commercial font or something made from scratch. I’m leaning towards the latter.